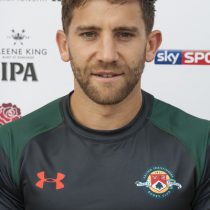 Carter established himself as first-choice scrum-half in the Ealing Trailfinders since his move from Rotherham Titans in 2016.

The former Rosslyn Park number nine played 27 matches in the Championship and British and Irish Cup, scoring 5 tries before putting pen to paper on a new deal with Ealing for the 2017/18 season.

Carter graduated from the University of Bath in 2012 with a degree in Sports Performance. He has also previously played for Henley Hawks and Rosslyn Park.

Originally from Berkshire, Carter made 58 starts in the Trailfinders jersey in two seasons. However, a knee injury picked up against Cornish Pirates in September 2018 ruled him out for the vast majority of the 2018/19 season.

The Berkshire native then joined Hartpury at the end of the 2018-19 season and was named captain the following season.

In June 2020, the experienced back joined Championship rivals London Scottish.