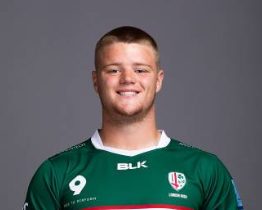 The prop has also previously been part of the Middlesex team at county level. Green played his club rugby at London Irish Amateurs before joining the club's Academy when he was 15 years old.

His father Mark Green played 88 first team games for Harlequins and England age group (U16). Prop Luke himself made his England U18s debut against Scotland in March 2019, also playing a week later against France.

Playing his club rugby at Harlequins, Green was named in the 2021 U20 Six Nations squad.