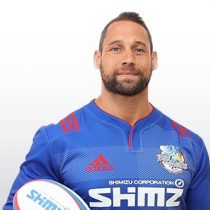 But what many don't know is that he spent many years in England as a youngster while his father played Rugby League.

He played for Silverdale in the North Harbour premier competition before making his provincial debut for North Harbour in 2002 and Super Rugby debut for the Blues in 2004.

Luke made his international debut for the All Blacks aged 21, versus the British and Irish Lions in 2005.

During his time in England he was a member of the Manchester United Academy. The big inside back is a strong runner and exciting ball carrier with a great boot, out of hand and off the tee.

With 51 Super Rugby caps for the Blues, in 2 separate stints with the franchise and 2 years at Sale Sharks, McAlister made his way to Toulouse in 2011 to play Top 14 and Champions Cup rugby.

In April 2017 it was confirmed that McAlister would leave Toulouse and join Toulon ahead of the 2017/18 season. Luke signed for Clermont in November 2017 as a medical joker.