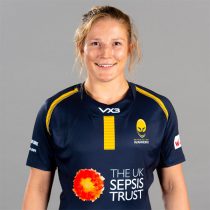 Stourbridge born, she later attended Ounsdale HS in Wombourne and King Edward VI College in her home town. She works as an occupational therapist after getting a degree in that very discipline at the University of Derby and she is employed as a social inclusion development worker in Gloucestershire.

Lydia ran in three tries on her international debut against Spain in the 2012 European Cup. She followed that with two blistering touchdowns in the opening pool game against Samoa in the 2014 World Cup in France before being ruled out of the tournament through a groin injury.

She was a central figure in all three matches in the Rugby Super Series at Salt Lake City in July 2016 and scored a stunning hat-trick of tries in the 39-13 win over the United States in the final game. Her 19th try was against New Zealand at Twickenham Stoop in November and her 20th followed in the next match against Canada a week later at Twickenham Stadium.

Having polished her skills at the 2017 6 Nations, Lydia was named to the squad that would take part at the 2017 Women's World Cup with 34 caps to her name.

Thompson was in devastating try-scoring form at the 2017 World Cup where she crossed five times in four games, her incredible solo effort against New Zealand inspiring a generation and since then her eye-catching displays continued with an impressive hat-trick against Ireland at Twickenham in autumn 2018.

In July 2021, she signed a new deal to remain with Worcester Warriors.