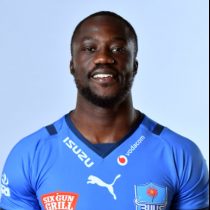 Madosh Michael Tambwe was born in Kinshasa, Zairea now the Democratic Republic of the Congo and moved to South Africa in his youth. Tambwe attended Parktown Boys High School in Johannesburg and was selected for the Lions Craven Week side in 2015.

He joined the Lions under 19 squad after finishing school and despite playing off the bench for the majority of the competition he scored 16 tries in 11 matches.

Following his impressive form with the U19 he was called into the Lions Super Rugby squad ahead of the 2017 season and made his debut against the Reds playing a full 80 minutes.

2019 saw Tambwe sign a deal with the Sharks ahead of the 2020 Super Rugby season.

In February 2021, Tambwe made the switch to the Bulls.