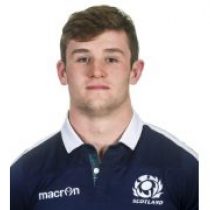 Born in Glasgow, Bradbury represented Glasgow at under-16 and under-17 levels, Edinburgh at under-18 and Scotland at under-17. Previously of Oban High School, Bradbury secured a scholarship to study at Merchiston Castle School, during which time he made his Scotland under-18 international debut, coming off the bench against England in March 2013 and making the starting XV in the victories over Ireland and Wales.

Bradbury played in the 1st XVs for both Oban Lorne and Merchiston Castle (season 2012/13) before earning an elite development player (EDP) contract with Edinburgh Rugby this summer.

He came to prominence as a teenager under Alan Solomons at Edinburgh, and blossomed under then-new coach Duncan Hodge’s more expansive regime, scoring tries against both Ulster and Treviso and winning a succession of man-of-the-match awards.

His speed and defensive solidity was particularly important against Argentina which culminated in a huge win for Scotland in the Autumn International.

Bradbury was called up to the Scotland Six Nations Squad ahead of the clash with France, where he made his debut in the competition.

September 2019 saw him replace injured teammate Hamish Watson in the Scotland 31-man squad for Rugby World Cup 2019 after the openside flanker sustained a knee injury in the national team's Pool A defeat to Ireland at the International Stadium Yokohama.

Bradbury returned to club action in October 2019 as Edinburgh beat Scarlets 46-7 at BT Murrayfield and featured in nine matches, including a 61-13 win over Southern Kings that saw the capital side move to the top of Guinness PRO14 Conference B.

As of June 2020, Bradbury has made 75 appearances for the club and has scored 45 points.