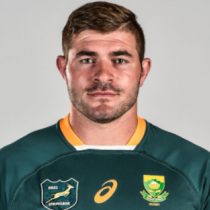 A powerful hooker with an array of talents, Malcolm Marx has joined a long list of world-class South African hookers.

Marx started his rugby career in the backline, at school, but slowly made his way into the forward pack appearing at flank and eight-man for KES and the Lions Craven Week side before his final year of school when former Springbok coach Heyneke Meyer suggested he moved into the front row, which earned him a call up to the SA Schools side.

In the 2013 Varsity Cup Marx made 8 appearances for UJ and scoring 4 tries. In the same year he played Lions U19 and scored 4 tries in that season on his way to earning the Golden Lions U19 Forward Of The Year.

Having represented SA Academy, SA Schools and the SA U20 side it would be a matter of time until he played Super Rugby and in 2015 he made his run on debut for the Lions.

Marx cemented his position at the Lions and helped his side to the 2016 Super Rugby final, where the Lions were beaten by the Hurricanes.

His fine form with the Lions saw him being named in the 2016 Springbok squad ahead of the Rugby Championship. He made his international debut, off the bench, losing 41-13 to New Zealand.

Marx was given his first test start against France in June 2017 and cemented his spot in the Springboks no.2 jersey starting the other 2 test against the French and all 6 of the Springboks Rugby Championship matches.

He featured in 16 of the Lions 19 Super Rugby matches and was the top try scoring forward in the competition with 12 tries.

He was one of four Springbok try scorers in the 36-34 victory against the All Blacks in Wellington in The Rugby Championship on 15 September, 2018.

He was shortlisted for World Rugby Player of the Year 2018, alongside team-mate Faf de Klerk. The award was ultimately won by Ireland's Jonathan Sexton.

Marx enjoyed a temporary release after the 2019 Rugby World Cup for a sabbatical in Japan. He returned to Japan with Kubota Spears in 2021.

Marx played a pivitol role in the Springboks Rugby World Cup victory, coming off the bench early in the final taking his test cap tally to 33 and has scored 5 test tries.