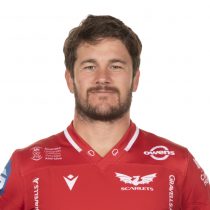 Born in Pontypridd, Wales, Jones is a dynamic hooker who plies his trade with the Sale Sharks in the English premiership.

Having linked up with the club in 2005, Jones has amassed over 100 caps for the northern English side and has become an integral member of the Sale setup. Jones has turned out for several Welsh underage sides, including the Wales Under 20's.

Marc (29) made his first team debut for Sharks back in the Premiership winning season in 2005-2006 and went on to make 158 appearances as Hooker. During his time at Bristol, Marc captained the side .

In March 2017, Marc Jones re-signed with Sale Sharks on a two-year deal.

In August 2018, Jones was granted an early release from his contract in order to take up three-year deal with Scarlets ahead of the 2018/19 season.