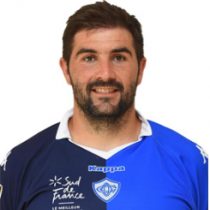 Former France U20s international Marc-Antoine Rallier has spent the majority of his career in the South of France with Castres.

In 2010, Rallier left Castres to join Colomiers, where he made over 20 appearances before re-joining Castres a year later.

The powerful hooker has been a mainstay in the Castres lineup and has accumulated over 100 appearances for the club and helped the side to a Top 14 title during the 2012/13 season.