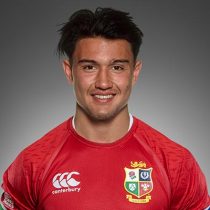 Smith was born in Manila in the Philippines and picked up the game at the age of 7 with Centaurs RFC when his family decided to move to Singapore, he learnt the game there before moving to Sussex as a 13-year old.

The naturally gifted playmaker received a sports scholarship to attend Brighton College where he studied maths, politics and business while going on to achieve great things on the rugby pitch as he captained the school's 1st XV en route to an unbeaten campaign.

After representing England in the 2017 U20 Six Nations, Smith was drafted into an England training camp earlier in July and withdrew from an England Under-18s squad who toured South Africa this summer to allow him to train with Quins.

At just 18 years of age and 200 days, he made his Premiership debut at Twickenham to become the youngest fly-half to start in the top flight since a 17-year old George Ford.

Smith only left Brighton College in the summer after taking his A-levels but has impressed in pre-season, and was given a chance to showcase his talents in the opening round of the 2017-18 Premiership season in the No.10 shirt.

After three impressive showings, including a man-of-the-match award against Wasps, Smith was named in a 33-man England training camp for the November Test Series.

In October Eddie Jones included Smith as one of two apprentices in his squad for the November Test against Argentina, Australia and Samoa.
.
In January 2018, Harlequins announced that Smith signed his first senior professional contract with the Club after a breakthrough year which saw the fly-half go from an Academy player at the Club to first team regular.

The fly-half was then included in Eddie Jones' 35-man squad as an apprentice player for the 2018 Six Nations opener against Italy.

In 2019/20, Smith's form was equally impressive, scoring 237 points across his 31 appearances for the Club, earning himself a starting shirt in England's Quilter Cup match against the Barbarians in June, a fixture where he was named "Man of the Match". He was also named in Eddie Jones' wider training squad for the 2019 Rugby World Cup in Japan.

In February 2021, Smith signed a new deal committing his long-term future to Harlequins. While playing for England against Canada in July 2021 it was announced he was called up to replace Finn Russell in South Africa for the British and Irish Lions.

He links up with the Lions with just two test caps to his name.