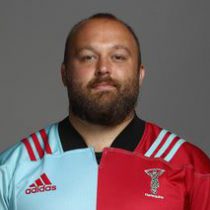 The graduate from the Harlequins academy is a staunch member of the front row club. The burly prop forward is a former England Under-19 and U21 player and has also featured for the England Saxons in the past.

Having substantial Premiership experience makes Lambert a quality front ranker able to offer stability in the set-pieces with his ability to play either tighthead or loosehead also makes him invaluable.

He made his debut for the England Saxons against the Argentina Jaguars at the 2009 Churchill Cup and was a replacement for Harlequins in their 2011–12 Premiership final victory over Leicester Tigers. Lambert made his 200th appearance for Quins in the 2016/17 season; one of only four players in the squad to achieve that number, alongside Mike Brown, Chris Robshaw and Danny Care.

During the 2019/20 season, Lambert made his 250th Harlequins appearance in the Club’s home victory over league leaders Exeter Chiefs.

The longest-serving Harlequin in the professional era, the proud owner of the 15th longest Premiership Rugby career to date and the record holder for Premiership Cup appearances, Lambert joined Harlequins ahead of the 2004/05 Premiership season, going on to win silverware on three successive seasons with the Club, lifting the 2010/11 Amlin Challenge Cup, 2011/12 Aviva Premiership and 2012/13 LV Cup trophies.

In June 2020, Lambert confirmed his retirement with immediate effect. He will continue his role as Chairman of the Rugby Players Association (RPA) and as an ambassador for the Harlequins Foundation.

The Quins legend made over 250 appearances for the club making him one of the most-capped players in the Club's history.