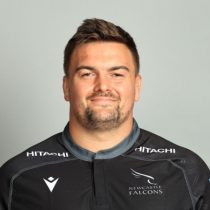 Tampin was born in London but began his professional rugby career in Yorkshire, coming through Leeds Carnegie’s academy and going on to make his name as a regular for Rotherham Titans.

Moving to Jersey Reds for the 2016-17 season where he played alongside current Falcons players Gary Graham and Sam Lockwood, Tampin spent the two seasons at Ealing Trailfinders.

In May 2019, he signed a two-year deal with Newcastle Falcons.