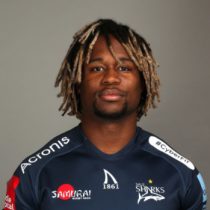 Born in St.Lucia in the Caribbean, Yarde moved to England as a nine year old and attended the Whitgift School.

Yarde's career began at London Welsh before moving to London Irish in 2011 where he was able to showcase his raw pace, physicality and quick feet.

His performances in the English Premiership earned him a call up to the England national side for their 2013 summer tour of Argentina where he earned his debut and scored a brace of tries.

He spent four years with the Exiles for whom he made 47 appearances, scoring 13 tries before then making the short move across the capital to Harlequins in 2014.

In June 2016, Yarde was included in the England Squad under Eddie Jones for the Tests against Australia.

May 2017 saw him being included in the England squad for the two-Test tour to Argentina.

After 81 appearances and 27 tries for Harlequins, Yarde signed for the Sale Sharks in November 2017.