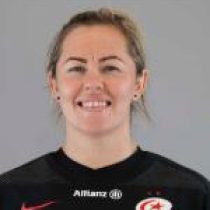 Yeovil-born Marlie left her West Country roots in 2013 to play for Wasps and has gone from strength to strength before returning to Bristol this season.

The flanker figured in the Sevens World Cup in Moscow three years ago and crowned a remarkable rise with a start in the 2014 World Cup Final in France on the back of scoring two tries against Spain in the pool stages.

She began her rugby career as a five-year-old with Ivel Barbarians, a club where she spent 13 years. Marlie then moved to Bath before joining Bristol in 2009. Marlie was the England Players’ Player in the 2012 Six Nations Championship.

Schooled at Birchfield, Buckler’s Mead and Yeovil College, she has done her time as a plumbing & heating engineer for Homeserve in South West London.

She earned a full-time contract with England Sevens in 2014 and played in the São Paulo leg of the World Series in February 2016.

Packer was a try-scorer in the 24-7 win over Brazil in her side’s final match of the tournament. She was awarded with a full-time 15s contract in September 2016 ahead of the World Cup in Ireland in 2017.

In her first match of the season, she dived over the France line to bridge a three-year gap since England’s last success in the fixture.

It brought a 10-5 win in the Old Mutual Wealth Series at Twickenham Stoop. Ten days later at the same ground, she made a stunning line break that created the position from which Harriet Millar-Mills scored England’s second try against New Zealand from a catch and drive.

Next up, when winning her 40th cap for the Red Roses, she made an impact off the bench against Canada the following week, her strong run creating try for Lydia Thompson.

Marlie was included in the England squad for the 2017 6 Nations, scoring 10 tries.

Ahead of the 2017 Women's World Cup, she has represented the Red Roses on 47 occasions.