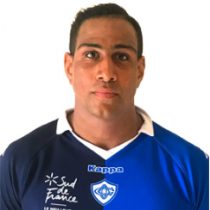 Former France u20 international Babilot represented Castres youth sides from the age of 10 years old and has remained at the club ever since.

His performances during the 2017/18 season earned him his first call-up to the French Barbarians side where he debuted against the Maori All Blacks.

The busy loose forward has become one of Castres' key players and was called up to the French national team again ahead of France's third 2018 Six Nations Championship match against Italy.

In September 2018, he was nominated Best International Player for France at the Nuit du Rugby ceremony in France.