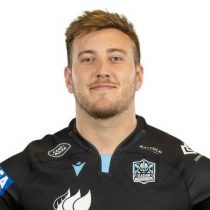 The younger brother of Zander, Matt made his Warriors debut in a pre-season fixture vs Canada 'A' scoring a try in the process.

Matt represented Scotland at U16 and U18 level and played his club rugby for Glasgow Hawks.

A physical back-rower, he was named in the BT Sport Scottish Rugby Academy Stage 3 Player list for the 2016/17 season.

He shone at the U20 World Championships in Georgia helping Scotland to a best-ever finish and was invited to train with the national side at their camp in St Andrews.

In September 2017, Fagerson signed a professional contract with Glasgow Warriors.

In March 2018 he was called into the Scotland Six Nations squad ahead of their final match against Italy, and was later included in the squad for the 2018 Summer Tour.

May 2019 saw him being named in Scotland's 42-man training squad for the Rugby World Cup.

The following year he was named in Scotland's squad for the 2020 Six Nations.