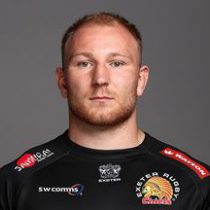 Kvesic made his first team bow for the Warriors in the LV= Cup in 2009-10, before featuring regularly in the first team in the 2010-11 Championship winning season. He went on to become a fixture in the first team set up, making more than 50 appearances.

He captained England U18s, was also capped at U20 level and was called up by Stuart Lancaster to train with England's senior squad ahead of the RBS Six Nations campaign in 2013.

Kvesic went onto get his first cap for the Test side in the 2013 Argentina tour, where he started openside flanker in the convincing 32-3 win.

Having initially started his senior career at Worcester Warriors in 2009, Kvesic spent four years at Sixways before making the short trip down the M5 to sign for Gloucester ahead of the 2013/14 season.

In January 2017, Kvesic became Rob Baxter’s first capture ahead of the following season and joined from Aviva Premiership rivals Gloucester.

The flanker, who has won four England caps, agreed a three-year deal at Sandy Park.