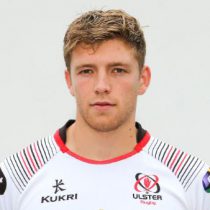 The Ballymena second row has developed his all-round rugby skills hugely since catching the eye at schools level.

He represented Ireland at Under 19 level in 2011, but it says much about how closely Ulster monitors the game that it was his consistently high-class performances for his club which convinced the coaching staff that he deserved a Development contract.

Rea has continued to extend his skills and gained vital experience in the senior side as a result.

In the current season, he has been a regular starter for his side scoring twice, once against Munster and once against the Scarlets.