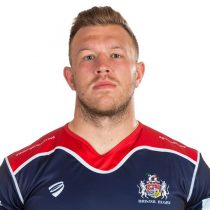 A dynamic hooker, Crumpton has represented England at various underage levels having appeared for both the Under 18 and Under 20 sides.

Educated at The King John School in Thundersley, Essex, Crumpton is a graduate of the Saracens academy and has since progressed to the first-team squad. Crumpton joined Bristol in 2014 from Harlequins.

Crumpton has played 46 times for Bristol scoring 13 tries when he entered the 2017-18 season with the side.