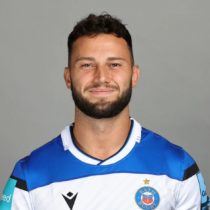 Green is of Swedish decent on his mothers side, of which he has made use and represented Sweden on the Rugby Field.

He has also represented England u20's. Green is a product of the Yorkshire Carnegie Academy and also played for the senior team since the 2015/16 season.

His rugby education included winning the BUCS league in 2015 with Leeds Beckett University.

An intelligent, dynamic scrum-half, Green broke into the starting line-up for Carnegie in the 2015-16 season, earning a regular starting spot the following year.

He enjoyed Champions Cup action in the 2018/19 season, making regular appearances in the Premiership.

In March 2021, it was announced that Green would join Jersey Reds on loan after the latter experienced a run of injuries in the opening weeks of the Championship season.