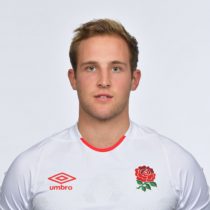 A try on his England U18 debut off the bench against France at Doncaster in February 2015 and a place in the starting side that beat Scotland 39-27 at Newcastle added to the distinctions of Max Malins, a former student at Felsted in Great Dunmow, Essex.

He then scored two tries when leading the team to a 33-8 win over South Africa A that August and added another against South Africa in the final tour game.

Max completed a ‘double’ with another try when making his first appearance for England U20 against Italy last February. He made a second touchdown against France in the final match of the 2016 Championship, added two more against Scotland and South Africa in the World Rugby U20 Championship this June and has played in all of England’s past nine games at that level.

A fly-half and centre, he had a full-time contract with Saracens Senior Academy having already played in the Premiership 7s at Franklin’s Gardens (2013) and the World Club 7s festival in Munster the same year.

Max also enjoyed his first experience of senior rugby in National Two South last season on a dual registration with Old Albanians. He was among the tries and points during their impressive return to National One. but suffered the frustration of a shoulder injury in pre-season training that ruled him out for the first three months of the current campaign.

Max helped Felsted to reach the NatWest Schools Cup U18 Vase final against Yarm three years ago and to win seven age group tournaments with Bishop’s Stortford. Will and Sam, Max’s brothers, attended Felsted, won Hertfordshire age group honours and Will was a member of Saracens Junior Academy (2012/13). Max also captained the Saracens U18 side that lifted the Academy League title.

In October 2017, the fly-half signed a new contract with Saracens, keeping him at the club until at least 2020. March 2020 saw him commit his future to the North London Club until 2023.

Malins will spend the end of the 2019/20 season on loan with Bristol as well as the 2020/21 season before returning to Saracens.

After a brilliant end to the season for his adopted club, Bristol Bears, where he went on to win the Challenge Cup he caught the eye of Eddie Jones and was included in the England squad ahead of their match against the Barbarians as well as the final Six Nations game against Italy