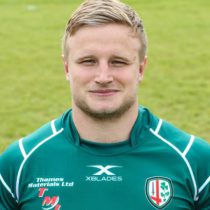 As a promising back-row Northcote-Green was snapped up by Bath in 2013 after impressing for Millfield School. In his first season he helped Bath United win the Aviva A League.

Northcote-Green joined London Irish from Bath Rugby ahead of the 2016/17 season, the athletic back row scored three tries in seven appearances before injury curtailed his campaign.

In November 2017, Max committed his future to London Irish, putting pen to paper on a new deal with the Exiles.

Now back to full fitness, Northcote-Green has been in fine form of late with his two eye-catching scores against Bath in the Anglo-Welsh Cup underlining his qualities.