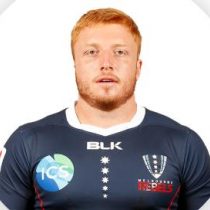 A student of Hooerskool Ben Viljoen in the remote region of Limopo, Erasmus was drafted into the Natal Sharks U21’s squad upon finishing his schooling.

The front-rower eventually graduated through to the side’s Vodacom Cup side.

A South African-born loosehead prop who has represented Perth Spirit, as well as the Western Force 10's, Erasmus is a big unit that is difficult to bring to the ground and a real asset in the scrum.

Despite suffering injury setbacks during his time in Western Australia, Erasmus impressed coaches, putting in memorable performances at the World Club Tens where his barnstorming runs went viral and turned him into an online sensation.

In November 2017, Brumbies signed Erasmus on an EPS [Extended Playing Squad] contract for 2018.

He was included in the Brumbies 2018 Super Rugby squad where he made his debut against the Jaguares in Round 10 of the competition.

Following his stint in Canberra, Erasmus joined the Melbourne Rising for their 2018 NRC campaign.

After consistent performances in the NRC, he joined the Melbourne Rebels for the 2019 season and played in the Club's two trial matches.