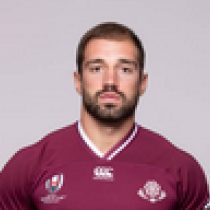 Merab began rugby in Tbilisi with the club 'Academia'. Aged just 16, he was called up to Georgia U18 team.

During the summer of 2014, Sharikadze signed to another Pro D2 side, Stade Aurillacois Cantal Auvergne.

At international level, the inside centre played his first game against a Tier 1 nation in November 2014, against Ireland.

Ahead of the 2017 November Internationals, Merab has won 54 caps for Los Lelos.