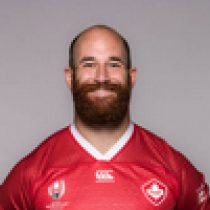 A strong utility forward, Sheppard can play both lock and flank and captained the Toronto Arrows during their exhibition season in 2018 before he signed on with the club to play in their first season of the Major League Rugby in 2019.

On November 11, 2018 he made his test debut for Canada as a substitute against Kenya and scored a try in the 69th minute.

He has been included in the Pacific Nations Cup squad where he will look to add to 5 test caps and three starts.