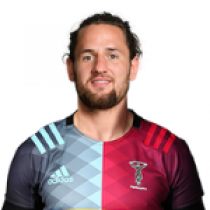 Michele Campagnaro is a promising young Italian, already seen with the Italian Under 20's and the Seven's jersey. Campagnaro comes from the Rugby Mirano Academy before playing for Treviso for two years. In 2015 his impressive performances in Italy led to him signing for Exeter for the 2015 season.

He had a run of games in the 13 jersey for Exeter Chiefs during January 2017 which led to 6 tries in 4 matches including a hat trick against Wasps Rugby.

In mid January 2017, he was named in the Italy squad for the Six Nations tournament, the competition that he has played 10 games and scored 10 points.

In February 2017, Campagnaro put to pen to paper on a new deal with Exeter that will see him remain at the club for at least the next two years.

In October 2018, Exeter Chiefs announced that Campagnaro would leave the club at the end of the month and become a free agent.

In November 2018, the Italian star was picked up by Wasps on a one-season deal.

The strong, ball-carrying centre, who can also cover wing represented Italy in the recent Six Nations campaign and to date has amassed 42 caps for Italy and scored nine tries for his country.

He joins the Harlequins for the 2019/20 season, after the Rugby World Cup.