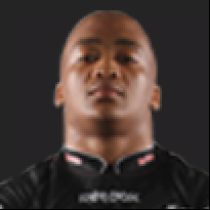 Durban-born and educated at Westville Boys’ High School, Hadebe was captain of the Sharks U21 squad that finished second in the 2012 Under-21 Provincial Championship log.

He made three appearances for the Sharks in Super Rugby 2015 - against the Force, Lions and Bulls.

Hadebe was named in the Sharks training squad for the 2016 Super Rugby season but joined the Kings instead.

On July 20th, 2016, he tested positive for two forbidden forms of steroid and received a four-year ban from rugby.