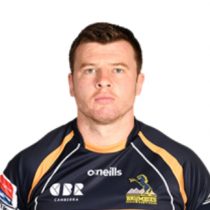 A well-travelled Scottish second-rower, Murray Douglas kicked off his professional career with Edinburgh Rugby back in 2011.

The Scottish lock and flanker came out to Australia in 2014, after a successful season with club side Heriot and being captain of the Scotland Club XV side that season.

He represented Melbourne Rising in 2015 before crossing the Tasman to join Mitre 10 Cup side Northland in 2017 having featured for the Melbourne Rebels in Super Rugby earlier that year.

Douglas has a Wellington connection after spending a summer with the famous Petone Rugby Club in 2012 before heading to Melbourne where he made his mark in the Dewar Shield and progressed through the Rebels development team to the Super Rugby squad.

He was brought into the Hurricanes Super Rugby squad ahead of the 2018 season having spent a lot of the 2017 Mitre 10 Cup season on the side of the scrum.

He made 7 appearances for the Hurricanes in 2018 taking his Super Rugby cap tally to 10 before signing a two-year deal with the Brumbies for the 2019 & 2020 Super Rugby seasons.

Joining the club in the 2019 season, Scottish-born Murray Douglas was an instant hit with both his fellow professional and the Brumbies supporters and was a valuable and reliable presence when called upon either in the second row, or at flanker.

A physical ball carrier who isn’t afraid of the hard knocks, Douglas was an important older-head in a young Brumbies line-up and his experience will be even more valuable in the 2020 campaign.

Douglas, who was educated at Balwearie High School in Kirkaldy, has spent the Super Rugby off-season back in his native Scotland with Edinburgh Rugby, getting more minutes under his belt and impressing with his determination and drive.