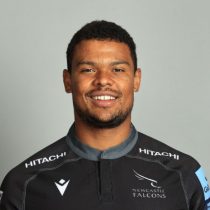 Born in Hong Kong, Earle is an electrifying outside back that plays wing and fullback.

He as represented England U18 & England Under-20 and was nominated for the 2014 IRB Junior Player of the Year award, scoring 6 tries.

After missing most of the 2014 season due to an Achilles injury Earle made the move from Bedford Blues to London Scottish.

After the 2015/16 season he made a move to NZ where he represented Canterbury, winning the Mitre 10 Cup.

Earle progressed to a full time member of the Saracens senior squad for the 2016/2017 season.

Uncapped Earle was again included in Eddie Jones' 35-man squad for the 2018 Six Nations where he did not debut but was again selected for the 2018 June Tour of South Africa. 2018 saw him join the Harlequins in the Premiership and was again named in the 2018 England squad ahead of the November Internationals.

Before sustaining a long-term knee ligament injury against Northampton Saints towards the end of the 2018/19 season, Earle bagged 11 tries in 23 Harlequins appearances, playing an integral role in an impressive 2018/19 campaign that saw the Club fall just short of that season's semi-finals.

In May 2019, Harlequins announced that the popular winger had signed a contract extension with the Club.

Nathan Earle joined Newcastle Falcons from Harlequins in the summer of 2021. A multiple Premiership title winner, the Hong-Kong-born flyer scored for Saracens in their 2017 Premiership final victory over Exeter Chiefs, and was part of the Harlequins squad which went on to win the 2021 final. He scored 23 tries in his 53 Premiership appearances prior to joining the Falcons in July 2021.