Barrett v Mo'unga | How The North & South Could Line Up

The squads for the eagerly-awaited have been selected by the All Blacks selectors Ian Foster, Grant Fox and John Plumtree with the All Blacks Assistant Coaches leading the two sides, with Plumtree and Scott McLeod coaching the North and Brad Mooar and Greg Feek coaching the South.

The inter-island match was once a regular fixture on the New Zealand rugby calendar, starting in 1897 and running through till 1995 when it became a victim of the crowded calendar that developed as the game went professional with just two games since 1985, the last of which took place in 2012 with the South winning 32–24.

Last month Ian Foster revealed how players would qualify to represent the respective teams with players becoming eligible for either the North or South Island side depending on which province they made their first-class debut for.


With the clash set to take place on 29 August, Sam Whitelock has been named as captain of the South team and Patrick Tuipulotu captain of the North.


We take a look at how the two sides could line up based on the 28 man squads announced on Tuesday. 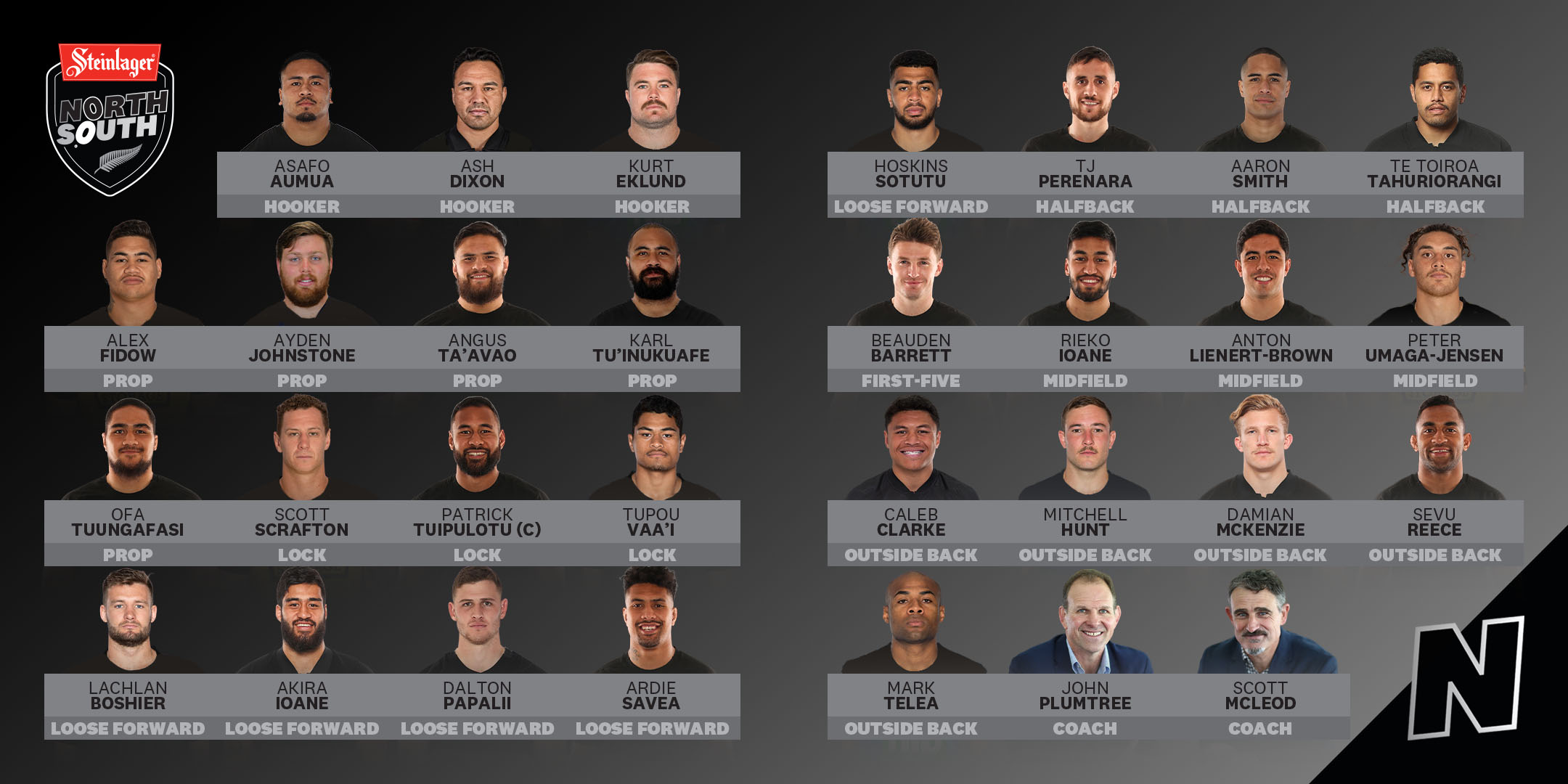 Despite Dane Coles' injury seeing him miss the clash, the North is strong up front with All Black Asafo Aumua likely to replace his Hurricanes' teammate with the in form Ash Dixon and Kurt Eklund providing cover. John Plumtree has a host of All Black props to chose from with Karl Tu'inukuafe, Angus Ta'avao and Ofa Tuungafasi at his disposal as well as the up and comers Ayden Johnstone and Alex Fidow.

The locking stocks have been spread somewhat thin in New Zealand but Plumtree has a strong stock with Scott Scrafton and Tupou Vaa'i who could partner captain Patrick Tuipulotu. There is quite a selection headache in the back row with Lachlan Boshier, Akira Ioane, Dalton Papali'i, Ardie Savea and Hoskins Sotutu all selected with Sam Cane injured and Vaea Fifita missing out.

Into the backs and Plumtree has the luxury of picking between Aaron Smith and TJ Perenara as well as Te Toiroa Tahuriorangi to partner Beauden Barrett with Barrett selected as the only first five in the squad, with McKenzie and Hunt covering the role too. Anton Lienert-Brown and Rieko Ioane are likely to form the centre partnership with Thomas Umaga-Jensen on the bench while Ngani Laumape is out injured.

Mitchell Hunt and Damian McKenzie provide the options at fullback with Mark Telea, Caleb Clarke and Sevu Reece providing an excellent crop of speedsters out wide. 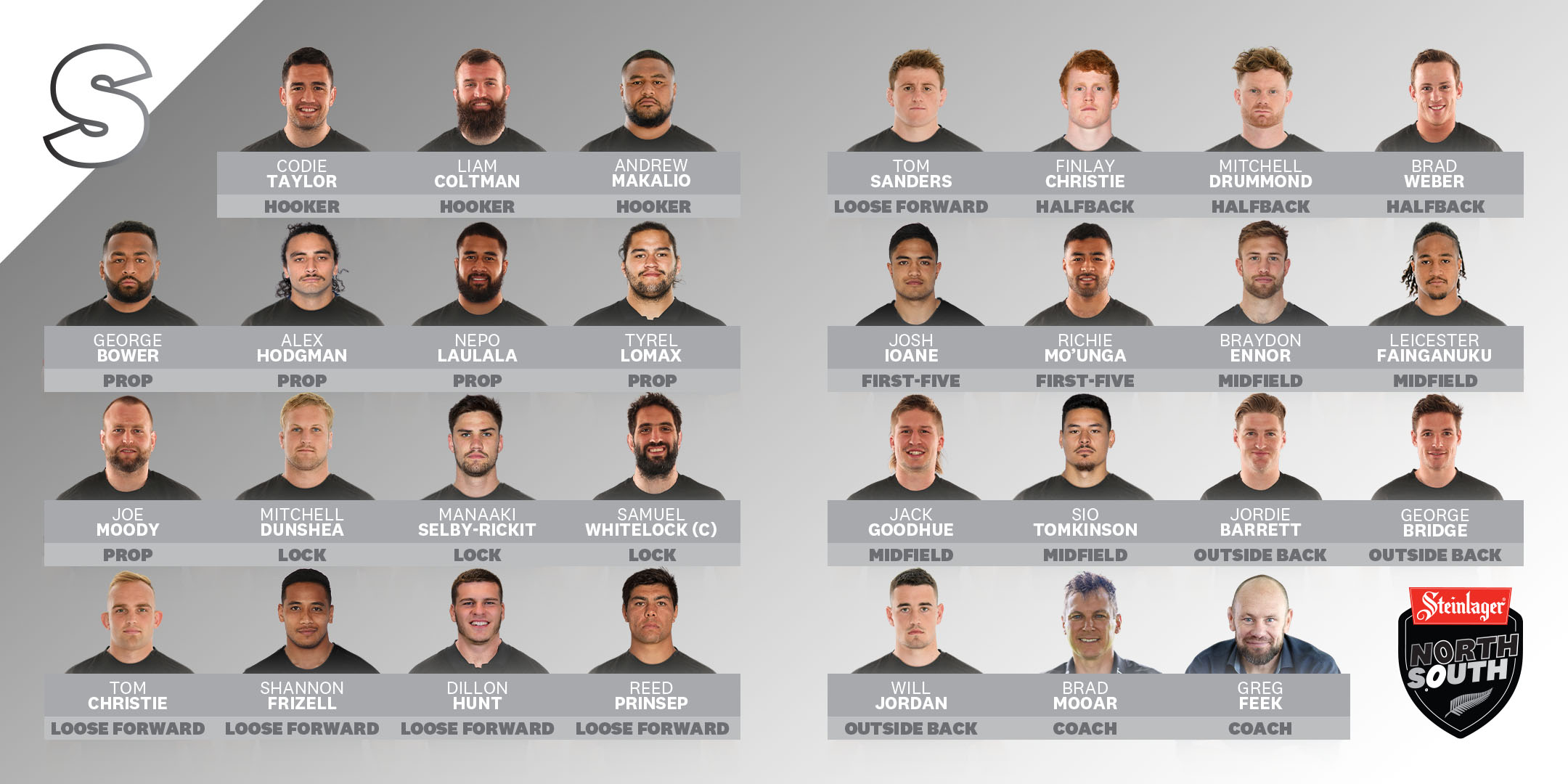 The South Island has a number of Super Rugby Aotearoa winning Crusaders' in their ranks.

Brad Mooar and Greg Feek could field a powerful front row with All Blacks Codie Taylor, Liam Coltman, Nepo Laulala, Tyrel Lomax and Joe Moody all making the side while Alex Hodgman, George Bower and Andrew Makalio could all disrupt the test front rowers.

The impressive Mitchell Dunshea is likely to partner captain and fellow Crusader Sam Whitelock in the second row with Manaaki Selby Rickit on the bench. Like the North have a selection headache in the back row, the South have one of their own with Tom Christie, Shannon Frizell, Dillon Hunt, Reed Prinsep and Tom Sanders in the squad.

All Blacks Mitchell Drummond and Brad Weber make up the scrumhalf options with Richie Mo'unga and Josh Ioane at first five. The South's midfield options include Crusaders Braydon Ennor, Leicester Fainganuku, Jack Goodhue and the very underrated Sio Tomkinson from the Highlanders.

Finally, Leicester Fainganuku could also force his way into the conversation out wide but would face stiff competition with Jordie Barrett, Will Jordan and George Bridge completing the side.

Who do you think will win it?🤔 How the North and South could line up for the highly anticipated clash on 29 August 🔥