Ireland tackle Scotland with one eye on the trophy

Ireland will return to Dublin with their tails up after a magnificent game saw them down the English 32-15 at Twickenham. This week, the Irish will give a last surge to cap off their campaign against the Scots.


The Twickenham victory a performance which both teams could be proud of – the Irish fought valiantly throughout while England were forced to hang on for pretty much the entire match with 14 men – but it was Andy Farrell’s charges who ultimately made the game their own.


A delighted Johnny Sexton said after the game:

“We got five points at Twickenham, if someone had told me that before the game I’d have snapped their hand off and run away with it. I don’t know the last time we scored four tries here and got five points so sometimes you have got to win ugly. I think we did that. It’s on to next week and all to play for.

“There’s plenty to improve. When you go down to 14 men, it was tough on them but the rules are the rules. It can be tough to play against 14, they had no option to kick the ball all day and they got some good reward from it.

“You have to do what you do (against 14 men) and try and do it better. We left a couple of opportunities behind at the start of the second half. If we had scored then, we might have forced them to play a little differently, and then the game becomes a bit different. So our lack of accuracy at times made things difficult.”

“If you’d said that to us before the start of the game we’d have snatched your hand off wouldn’t we.

“It’s obviously a tough place to come and we were under a bit of pressure there in that second half for a while and some of that was our own doing.

“The composure that we showed at 15-all to stick to our task and come away with the bonus point was something that we should be as a group immensely proud of.

“We’ve been here before and been under pressure and certain aspects of our game have not gone well before and the game has run away with itself and we’ve been on an early flight back.

“We became a little bit desperate at times, a little bit inaccurate at certain stages but having said all that, you take the rough with the smooth and we came away with a brilliant victory in the end.

“I thought the lads were really calm whilst under a bit of pressure, stayed on task and thoroughly deserved that bonus point today in the end.”

Ironically, Ireland will be rooting for the English this weekend as the latter take on the French. A victory for Eddie Jones’ men could translate into a competition victory for Sexton and co.

“The final half hour wasn’t great, we were looking to keep the pressure on and keep playing like we did and even up the tempo but it was Italy that won that period.

“There’ll be lots [to improve on]. We’ll go through the game and how we weren’t able to execute at times, how we conceded tries, but we’re also looking at Ireland and they pose different threats.

“We know we’ll have to be eight or nine out of ten for 80 minutes to have a chance of winning against Ireland, they’re a quality side and we showed a lot today that can suggest we can go there, a tough away venue, and come away with our best performance but there are frustrations that we didn’t do that for 80 minutes today.”

Despite pointing out the off-colour aspects of his team’s performance, Townsend also talked up the positive elements on display from the Scots.

“Game management, our effort, defence system looked really good and were in place and we took opportunities, that was really pleasing.

“I have to say Italy played really well right from the start and right to the end, that’s the best Italian performance we’ve come up against in the last few years.

“They put us under a lot of pressure and kept on going and got better so they can take a lot of encouragement from that, but we know we can play better – but Italy have played well today.”

The last five fixtures between these two sides have all finished in Ireland’s favour. In fact, the last time the Scots had the better of their rivals was back in 2017. The most recent clash was last year’s Six Nations match-up – a narrow victory for Ireland at Murrayfield:

The most noteworthy change to the Scotland line-up sees Blair Kinghorn taking over the flyhalf responsibilities from the enigmatic Finn Russell, who, along with Stuart Hogg, Ali Price, Darcy Graham, Sam Johnson and Sione Tuipulotu, was involved in some disciplinary action last week after the six broke team protocol by visiting a pub after returning from Rome. The SRU issued the following statement regarding the incident:

"The Scotland management team have this week dealt with a post-match matter involving six players following the game against Italy last weekend.

"The players involved have been spoken to individually and those conversations and outcomes will remain private.

"Preparations for the match against Ireland this week have been good and the whole squad is fully focused on achieving a positive result on Saturday."

The other change to the starting XV sees a shift in the second row where Jonny Gray replaces Sam Skinner who drops to the bench. 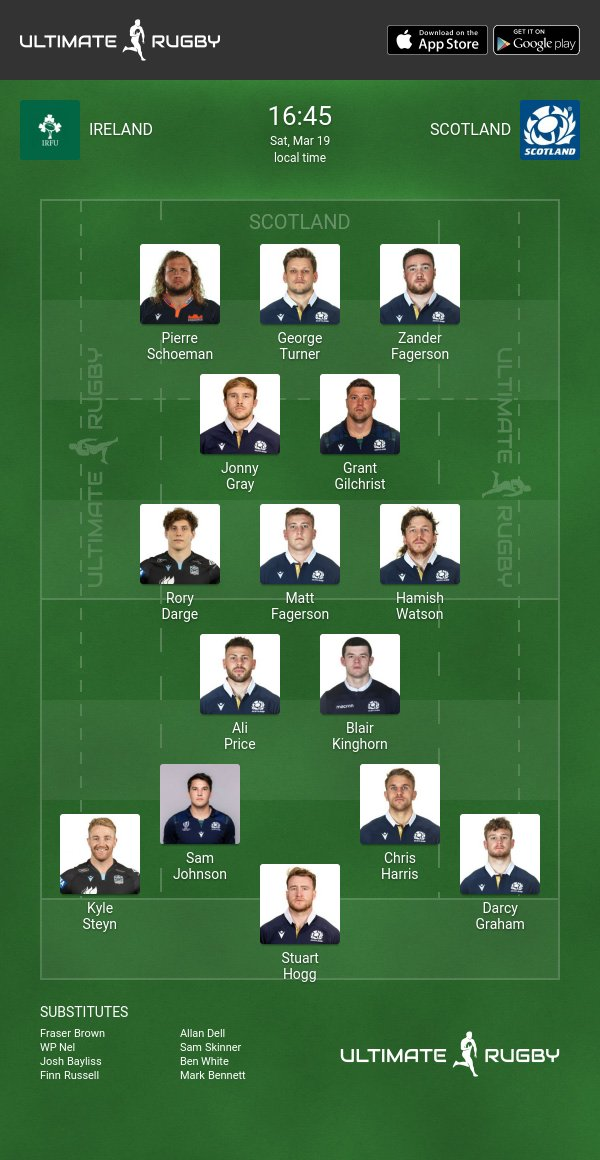 On the Irish front, Iain Henderson gets a start while Caelan Doris shifts from the back of the scrum to the side, making way for Jack Conan in the number 8 jersey. In the backs, Mack Hansen returns to the side in place of Andrew Conway. 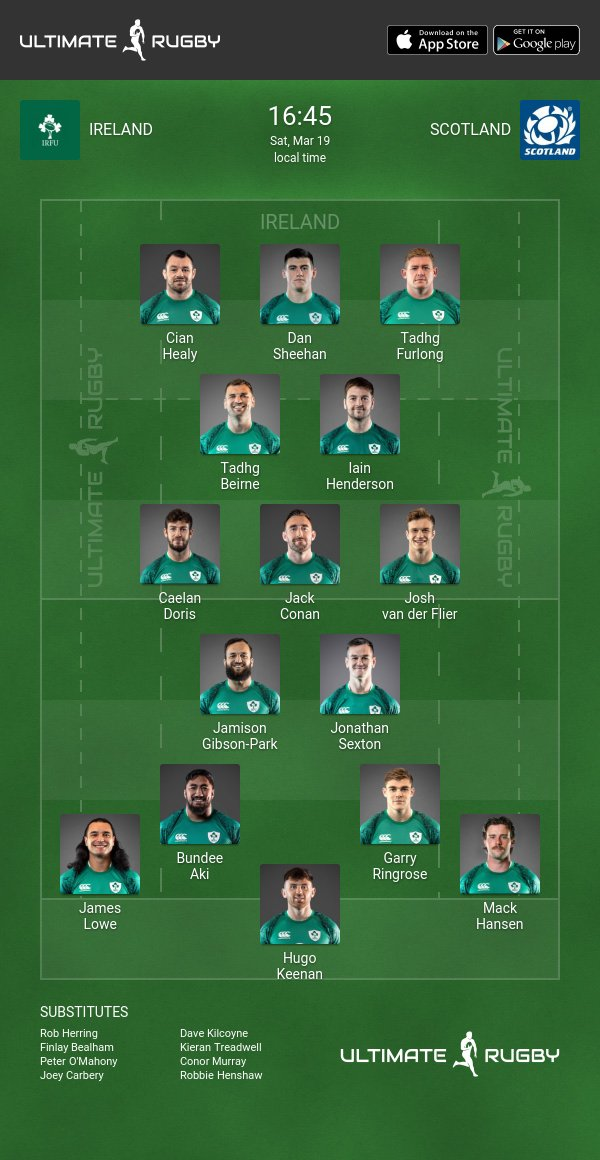 “As I said last week, people were right for the England game, it was the right balance," Farrell said. "That is what squad selection is all about, picking the right team for the right occasion.

“Jack (Conan) has done pretty well coming off the bench, he’ll be a fresh enough pair of legs to be at his best on Saturday evening.

“I thought James (Lowe) played really well last week, he’s not played too many games and that’ll be great for him to step up a notch this weekend.

“Hugo (Keenan) was immense and he’s really grown his game, it’s great – you guys asked Hugo the question yourselves, you look how well Michael Lowry is doing, the type of pressure that puts on the likes of Hugo is pressure that you want.

“You see people responding in the way that they should do, when they take to the field the next time and perform like he did. That’s what a competitive squad is all about. Those two did really well.

“He’s quick and he’s a good finisher. He’s improving all the time, how to be an international player, and this type of experience on Saturday will be priceless for him.”