Wallabies brace for big challenge from Scotland at Murrayfield

The first weekend of the Autumn Nations Series features a juicy clash between the Scots and Wallabies at Murrayfield.

Jamie Ritchie will lead Scotland out against Australia this Saturday at BT Murrayfield fresh from being named captain last week for this season’s Autumn Nations Series.

Ritchie has leadership experience with Scotland having co-captained the side last year to victory over Tonga.

He is joined in the back row by Hamish Watson, who led Scotland in their last outing, in the narrow defeat to Argentina in the third Test of the summer tour.

As part of the 23 players named in the matchday squad, which is made up of all home based players due to the match being played outside the designated international window, Matt Fagerson is named at number 8 and in the second row, Grant Gilchrist will partner Sam Skinner.

Fresh from winning his 50th cap in the summer, against Argentina, prop Zander Fagerson will pack down with Pierre Schoeman, either side of hooker Dave Cherry.

In the back division, Blair Kinghorn partners Ali Price at half-back, with Sione Tuipulotu and Mark Bennett selected in the centres.

Wings Darcy Graham and Duhan van der Merwe are joined in the back three by Ollie Smith, who will win his second cap and first at BT Murrayfield. The Ayrshire boy made his debut in Argentina in the third test, in Santiago del Estero.

In the replacements, Glasgow Warriors’ back row Jack Dempsey could make his Scotland debut. The 28-year-old Glasgow Warriors number 8 qualifies for Scotland through his Scottish grandfather. Having previously played 14 matches for Australia, Dempsey has made himself available to play for Scotland under World Rugby’s birthright transfer rules which allows a capped player to switch allegiance to another country they are eligible to play for following a three-year cooling off period.

Glen Young has been named on the bench having been called into the squad after Scott Cummings was ruled out of the Autumn Nations Series having sustained a broken toe in training this week. The towering second-row made his debut for Scotland in the summer and will be eying his first international appearance at BT Murrayfield.

Backs George Horne, Ross Thompson and Damien Hoyland, who would win a first cap since 2017, are also all listed as replacement options. 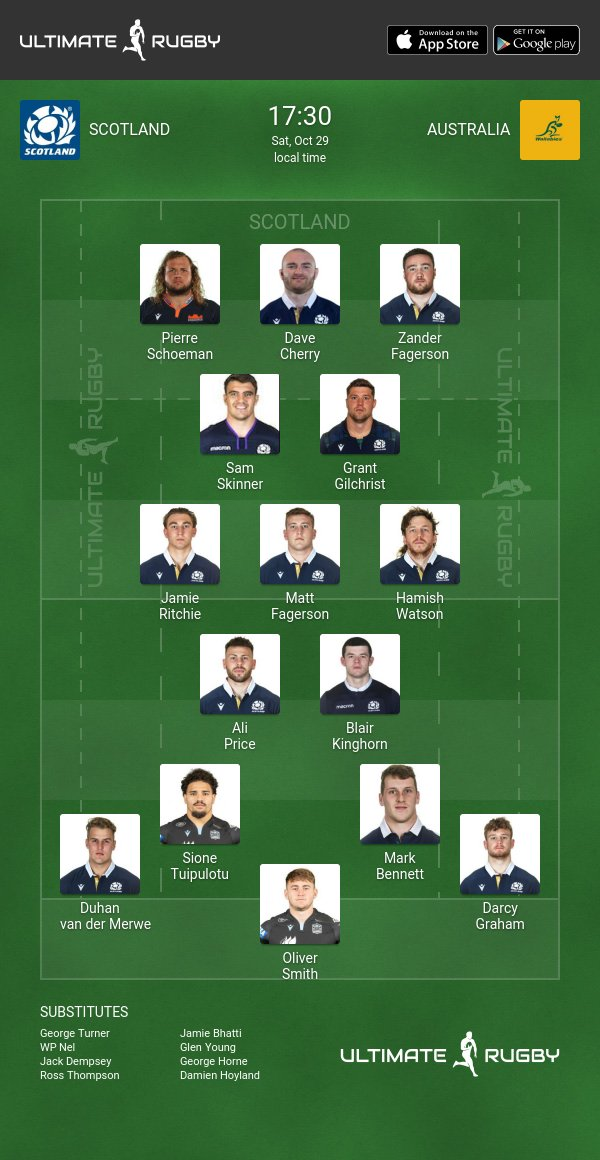 In the Wallaby camp, Test centurion Michael Hooper will make his return to the international arena on Saturday, named to start at openside flanker in the Wallabies’ Test against Scotland at BT Murrayfield.

Hooper hasn’t played since the side’s July Test series decider against England and will re-join a backrow that sees club teammate Jed Holloway at blindside flanker and Rob Valetini at number eight.

He’s one of a number of changes to the matchday 23 with Queensland captain Tate McDermott earning his first start of the 2022 campaign at scrumhalf, partnering Bernard Foley who will line-up for his first Test against the Scots since 2017.

Tom Banks is another who returns to the gold jersey in Edinburgh, selected to start at fullback after making a successful return to the field from a broken arm during the Australia A tour of Japan.  He will marshal a back three that sees Brumbies flyer Tom Wright on the left edge and the reliable Andrew Kellaway on the right wing.

Reds inside centre Hunter Paisami has been selected to make his return to the Test side where he will reignite his midfield combination with outside centre Len Ikitau who earns his 22nd cap for Australia.

The dynamic Nick Frost is the final change to the starting XV, selected for his second start at international level, partnering ACT Brumbies teammate Cadeyrn Neville in the second row.

James Slipper will captain the side as the loosehead prop in his 124th Test, with Allan Alaalatoa the starting tighthead and Waratahs rake David Porecki named at hooker in his first northern hemisphere International.

The replacement front row sees Folau Fainga’a as the finishing hooker, with Melbourne’s Matt Gibbon in line for his third Test appearance, while powerhouse Taniela Tupou will return to the side via the pine as the finishing tighthead prop.

Waratahs lock Ned Hanigan will play his first Test in over two years as the replacement second-rower, with Pete Samu covering the backrow as he looks to continue a rich vein of form on the field in 2022.

The Brumbies duo of Nic White and Noah Lolesio have been selected as the replacement halves pairing, with Queensland fullback Jock Campbell in line to become Wallaby number 959, named as a potential debutant as the back three cover on Saturday evening.

Wallabies coach Dave Rennie said: “We’re rapt for Hoops. He’s been outstanding both on and off the field since re-entering the environment and he can’t wait to pull on the gold jersey again.”

“Likewise for Tate who has been working really hard and deserves his opportunity to start, while Banksy has shown resilience to come back from another serious injury to earn his spot in the team.

“We’ve had a great preparation over the past week or so and we’ll head to Murrayfield excited by the challenge Scotland will pose on Saturday.” 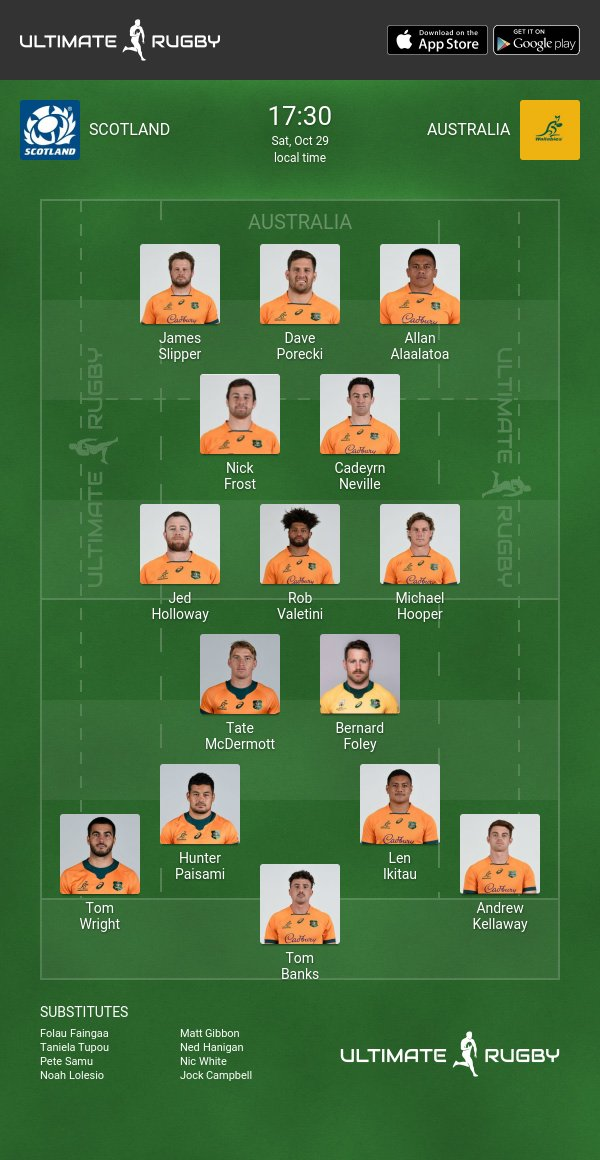 Scotland have won each of their last three Test matches against Australia after winning just two of their previous 21 (L19); four of the last five matches between these two sides on Scottish soil have been decided by margins of just six points or fewer.

Scotland have won just two of their last seven Test matches (L5) after winning six of their previous seven (L1), however, they have scored exactly four tries in each of their last two Tests.

Scotland have won five of their last seven matches on home soil (L2), however, they lost their most recent (17-36 v France in February); they have scored exactly 10 first-half points in three of their last four home fixtures.

Australia have lost each of their last three Test matches and conceded 39+ points in each of their most recent two, however, the Wallabies have not lost four consecutive Tests since a run between June and August 2018.

Australia have lost seven of their last eight away Test matches against European sides (W1), including each of their most recent four, however, two of their last three such defeats have come by margins of just two points or fewer (v Scotland and Wales in 2021).

Scotland had the highest goal-kicking success rate of any side in this year’s Guinness Six Nations (82%) and were the only team not to miss a single penalty goal attempt during the Championship (7/7).

Scotland were the only side to beat 100+ defenders in this year’s Guinness Six Nations (128) and also ranked second for line breaks (29) and carry metres (4,219m) among all teams in the Championship.

Australia were the only side with a goal-kicking success rate of 90% or better in The Rugby Championship this year (92%) and were the only team not to miss a single penalty goal attempt during the competition (9/9).

Scotland full-back Stuart Hogg carried for more metres than any other player in this year’s Guinness Six Nations (656m), while Hogg (15), Darcy Graham (19) and Ali Price (16) were three of just four players to beat 15+ defenders in this year’s Championship (also Monty Ioane – 21).

Australia’s Jed Holloway made 79 lineout takes in Super Rugby Pacific this year, more than any other player; his total included six lineout steals, only two players made more – fellow Wallabies Nick Frost and Izack Rodda (9 each).