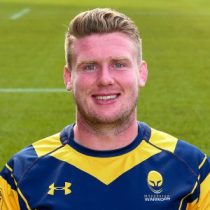 Niall’s tremendous leadership skills have led to him captaining representative teams at various levels, including the Ireland U20 team at the 2011 Junior World Championship. He signed a development contract with Ulster in the summer of 2011 and made his senior debut against Leinster on Boxing day of the same year.

In 2014, he was called up to the Barbarians squad to play against Leicester Tigers.

Annett signed for Worcester Warriors and played a key role in his first season at the Club, making 22 appearances, as Warriors secured promotion back to the Aviva Premiership at the first time of asking.

He was also part of the squad which won the British & Irish Cup that season, and also helped Worcester Cavaliers reach their first ever A League final.

He then played in all but one of Warriors’ 22 Premiership games back in the top flight in 2015/16 as he cemented his spot in the first-team.

The 2016/17 season saw the former Ulster man take his appearance tally for the Club to 52 before unfortunate injuries kept him sidelined .

In January 2018 he signed a new deal with the club that would see him remain at the Premiership for until the end of the 2018/19 season.

He signed a further two-year contract extension in December 2019 having made an impressive start to the 2019/20 season.