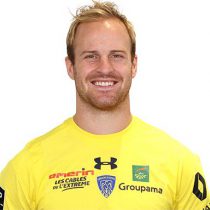 A strong tackler, balanced runner and dangerous counter-attacker, the South African firmly established himself as Clermont's first-choice full-back in times.

He earned his first England cap against his home country in June 2007. He was capped again against France in August 2007, but narrowly missed out on a place in England's 30-man World Cup squad that autumn.

Some fine performances saw him get rewarded with call ups for the England Saxons from 2008-2011, and his impressive performances in the Churchill Cup victory in 2010 resulted in him being named the Player of the Tournament.

He made the move to Clermont in 2014 after a highly successful career at Bath which saw him earn 207 caps for the English side, during an eight-year spell.

After a string of impressive performances for Clermont in the 2014/2015 Champions Cup, Abendanon was awarded 2015 European player of the year.

In October 2017, he signed on with Clermont for a further two season until 2020, with an option for another season.

Following the completion of his contract at Clermont, Abendanon considered retirement but opted to continue his career when he was offered a two-year deal with PROD2 club Vannes.