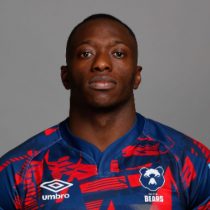 Born in Ibadan, Nigeria, Adeolokun came to Ireland with his family in 2001. He played a variety of sports as a child, including Gaelic football with Templeogue Synge Street and soccer and did not play rugby union until he attended De La Salle College in Churchtown.

In June 2014, it was announced that Adeolokun had signed for Irish provincial team, Connacht on a one-year deal and made his debut on 6 September 2014.

Adeolokun made 94 appearances for Connacht and has one cap for Ireland and was a try scorer for Pat Lam’s title-winning Connacht in the 2016 PRO14 final.

He joined Bristol Bears on a one-year contract in November 2020, having initially signed a short-term deal at the conclusion of the 2019/20 season.

In March 2021, the pacey wing extended his stay at Bristol Bears, signing a new one-year deal at Ashton Gate.