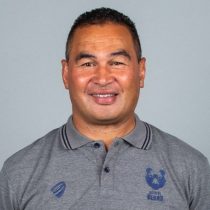 A powerful and uncompromising loose forward in his playing days, Pat Lam has taken some of those qualities into his post rugby career as a coach where he has been extremely successful.

Lam was an exceptional player who could defend with the best of them but was an asset offensively, and proved to be an inspirational figure during Samoa’s first three World Cups.

Lam kicked off his playing career with Auckland in 1990, his city of birth, and actually played one test for New Zealand before converting to the blue of Samoa. He made his debut for the Islanders in their famous 16-13 upset of Wales at the 1991 World Cup.

Samoa, or Western Samoa as they were then known, had a superb tournament considering it was their first, making it through the group stages before Scotland knocked them out in the quarter-finals.

He played a significant role for the side and would go on to play in 10 World Cup matches in total, scoring two tries as Samoa followed up their 1991 success with a quarter-final finish in 1995 and a quarter-final playoff exit in 1999.

A calm head on the pitch, Lam ended his international career the same way he started it, in an against-the-odds victory over Wales at the 1999 World Cup, and this time he got himself on the score-sheet.

Lam also turned out for New Zealand's other Auckland based side, North Harbour during his playing career and turned out for the Crusaders during the 1996 Super Rugby season before moving to England where he first played for Newcastle Falcons.

Capped over 30 times by Samoa, he continued to succeed at Newcastle as the side won the title in 1997/98 before moving to Northampton where he won the Heineken Cup in 2000.

The back-rower returned to Newcastle where he would conclude his playing career in 2002. He represented Newcastle over 50 times and fell just short of a half-century at the Saints.

Upon his retirement, Lam returned to Auckland as a coach in 2004 before leaving the Super Rugby team, the Blues in 2009. During his Auckland tenure, he also coached the Pacific Islanders in 2006 and was head coach of Super Rugby team the Blues from 2009 to 2012.

After a good season with the team, he looked for a new challenge and worked with Samoa on the team's 2012 tour, with the national team's victories seeing them reach eighth in the world rankings and a secure second-tier position for the 2015 Rugby World Cup.

It was this achievement that caught the eye of Connacht who appointed him as the side's ahead of the 2013-14 season. It didn't take too long for Lam to make his mark at Connacht as in his second as Lam led Connacht to their first-ever major trophy, the 2015/6 Pro 12 following a 20–10 win against Leinster in the final.

In December 2016, Lam announced his departure from Connacht after four seasons with the club to take up a new coaching role at Bristol Rugby, helping the side bounce back into the top flight in the 2017 season.

In his first season at the helm, Lam led Bristol to an immediate return to the Premiership with an impressive 21 wins out of 22, before taking the top flight by storm with his dynamic brand of rugby as the Bears finished just five points off the play-offs.

His second season with Bristol Bears saw the side finish 9th in Premiership, their first season back with side finishing comfortably above the relegation spot by 20 points.

In 2019, he led Bears to ninth position – the highest points tally for a newly promoted club in twelve years.

A year later, Bristol clinched a third placed finish in the Premiership and secured their first major silverware since 1983 with a European Challenge Cup Final victory over Toulon.

Then on the 2020 season, Bristol recorded their highest ever regular season position, topping the table and making the Champions Cup knockout stages, while Lam was awarded Global Reach Director of Rugby of the Year.

In September 2021, he agreed a new five-year contract, following the completion of his existing deal, until the end of the 2027/2028 campaign.