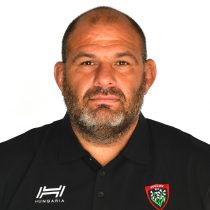 A born a raised Toulon man, Patrice Collazo started his playing career at Bordeaux-Begles in 1996 and stayed with the club until 2000 before signing for Stade Francais.

The powerful loosehead spent one season in Paris before moving to Gloucester. His form led to a national call-up where he made his test debut.

Again Collazo spent only one season at Gloucester, winning a Premiership side, before making the move back to France to join Toulouse.

He stayed at Toulouse until 2005 before returning to Gloucester where he spent another three years.

Collazo joined Racing in 2008 in what would be his final club before retiring.

Collazo retired with a reputation as a powerful scrummaging front rower albeit only making one appearance for the national side.

The former front rower started his coaching career with the Racing 92 youth side in 2010 and impressed during the 2010/11 season leading to La Rochelle signing him as the side's new coach.

He was extremely successful at La Rochelle taking the side from the ProD2 to the Top 14 top 4 & a Champions Cup QF in only a 4-year span.

Under his reign, La Rochelle was notorious for being almost impossible to beat at home.

In 2018 his reign as La Rochelle's head coach came to an end when he agreed to take over as Toulon's head coach on a three-year deal.