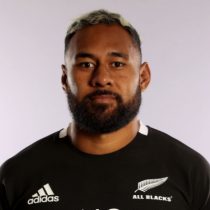 A large, physical player, Patrick Tuipulotu was born in Christchurch but schooled in Auckland.

Tuipulotu made his first steps towards becoming a full-time professional making his provincial debut for Auckland in 2012 as a 19-year-old.

The former St Peter's College graduate went on to represent the New Zealand u20s at the 2013 IRB Junior World Championship where he made five appearances and scored one try. The quietly spoken second rower's form during the 2013 Mitre 10 Cup season was rewarded with a contract with the Blues ahead of the 2014 Super Rugby season.

A formidable start to his Super Rugby career was rewarded with a call up to the All Blacks squad for that season's Steinlager Series against England in 2014. He made his test debut off the bench against England replacing Brodie Retallick.

Three further appearances off the bench followed before he earned his maiden test start for the All Blacks against USA in Chicago. In total, he played seven tests that year, including two Tests in the Rugby Championship and three Tests on the Northern Tour.

Double hip surgery in 2015 meant he missed all international rugby that year, including the Rugby World Cup, while his 2016 Super Rugby season was also disrupted by a hand injury. He returned to the All Blacks side later that year playing five Tests and made a welcome return in 2017 for the back half of the Rugby Championship and the Northern Tour.

He captained the Auckland in 2017 and 2018 before being named the captain of the Blues in 2019. Tuipulotu was impressive in 2019, with a powerful performance in the All Blacks' 36-0 victory over Australia highlighting his physicality and high work rate. He went onto play nine Tests that year, including five Tests at RWC2019.

In June 2020, Tuipulotu signed a new long term deal with the Blues and New Zealand Rugby until the 2023 Rugby World Cup. As of 15 June 2020, the hard-working second rower has 30 test caps, three tries and has represented his beloved Super side 74 times.