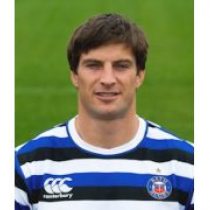 Grant was captain when Otago lifted the Ranfurly Shield for the first time in 57 years, and has also represented New Zealand in sevens rugby since 2008.

In October 2013, it was announced Grant would leave Otago in November 2013 to join French club Montpellier.

In September 2016, Grant joined Bath after playing more than 60 games for New Zealand provincial side Otago.

The back-rower is no stranger to English rugby, spending the two years playing for Nottingham during the 14-15 and 15-16 seasons after his move from French side Montpellier.

In May 2017, Grant signed a new contract with Bath in May, which kept him in the West Country until the end of the 2018/19 season.

The former New Zealand Sevens international has shown his pace and attacking flair from the back of the scrum, utilising the skills learnt in the shorter format of the game.

After 46 appearances for Bath, Grant signed a deal with Ealing Trailfinders.