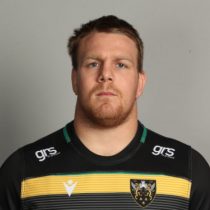 Born in Germany, Hill started playing rugby when he moved to England for the Doncaster Knights U7 side. Since then he has won the Junior World Cup with England U20's and was selected for the 2016 England Senior squad ahead of the 6 Nations.

During the Championship Paul made his debut for England as a replacement for Dan Cole in their win over Italy in Rome. Prior to his first Test cap for England Paul had represented his country at Under-17s, Under-18s, Under-19s and Under-20s. In total, he made 19 appearances for the England Under-20 side and took part in two World Championship finals, including the 21-20 win over South Africa in 2014.

In May 2016, Paul was named on the replacements bench for their summer Test against Wales at Twickenham. He was subsequently selected for England's summer tour to Australia, helping his side win their first ever Test series Down Under.

Hill was named in Eddie Jones' squad for a two-test tour to Argentina in June. Following his inclusion into the summer tour squad, Hill had to withdraw due to an ongoing neck injury.

In February 2019, he signed a new deal with the Saints having represented the side on 78 occasions.

In February 2020, he signed a new deal to remain with Saints. The following year he signed another contract extension for the 2021 year.