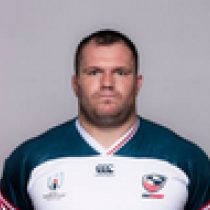 Originally from Ireland, Mullen had his first appearance with USA Rugby at the age-grade level during the 2011 U20s Junior World Trophy in Tbilisi.

Introduced to the sport when he was 13, the athlete holds a breadth of experience playing for the Munster U18, U19 and U20s programs, along with time spent with The King's Hospital school in Dublin and Munster-Connacht.

In 2011, the year he made his first appearance with the U.S. U20s, Mullen moved to Texas where he earned a Bachelor’s Degree in Marine Engineering Technology and a Masters in Marine Resources Management.

Making his full international debut in 2018, he started in the USA's victories over Canada, Scotland and Russia, and played his club rugby for Major League side Houston SaberCats.

In August 2018, Mullen joined Newcastle Falcons for the first four months of the Premiership season as the club bolsters its propping stocks.