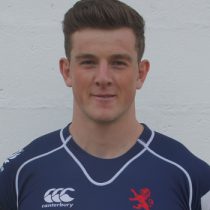 Born in the Hague, Netherlands, Irishman Lydon was brought up in Kilkenny where he first played club rugby. From there, he played in the Irish league for Seaport where he caught the attention of Top 14 outfit Stade Francais.

He mainly featured in the European Challenge Cup during his solitary season over the channel – making a total of seven appearances. Lydon spent 3 seasons at London Scottish and has a points tally of 485 after 2 seasons of regular first team appearances.

He has featured on 74 occasions for the Scots after joining at the beginning of the 2014/15 season, and has been a standout performer in the 15 shirt since signing from State Francais.

Lydon scored 642 points in his time at the Athletic Ground, making him one of the top scorers in the Greene King IPA Championship over the last three seasons.

His left boot has proved to be the match-winner on a number of occasions which has consolidated the Irishman one of the fan favourites, earning him the 2015/16 Player of the Season Award.

Lydon will join Ealing Trailfinders for the 2017/18 season. Since arriving in the Championship from 2014, Lydon has been one of the league’s most dependable performers in open play and from the kicking tee, winning the London Scottish’ Player of the Year award in 2015/16.

The playmaker turn finisher has finished each of the last two seasons as the league’s second-highest points scorer, registering 858 points from just under 100 appearances.

In January 2020 he signed for Bedford Blues on loan.