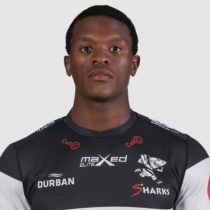 Buthelezi was a member of the Junior Springbok squad in the 2018 World Rugby U20 Championship.

He was in coach Chean Roux’s expanded squad for the warm-up matches in Stellenbosch and in the UK and was later called up to the U20 Championship as an injury replacement.

In May 2019, he was named to lead the Junior Springbok to the World Rugby U20 Championship.

Already signalled as a future star, Buthelezi made his Super Rugby debut for the Sharks in 2019.