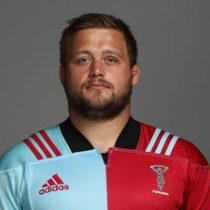 Swainston is an industrious prop forward who primarily operates on the loosehead side of the scrum. A graduate of Harrogate Grammar School, Swainston linked up with London Wasps in the 2012 off season and has previously represented Rotherham Titans and Leeds. Swainston has also represented England at several underage levels in the past.]

Harlequins announced the signing of Wasps tighthead prop Phil Swainston, who will join the Club from July 2017.

An established Aviva Premiership player, the 27 year-old has made over 80 appearances for Wasps since joining in 2012. The former Leeds man, who began his career at Harrogate, was called into the 2012/13 England Saxons squad to play Scotland A.

Since joining the Harlequins Swainston has struggled for game time, it was only in the 2018/2019 season where he made more than 10 appearances.