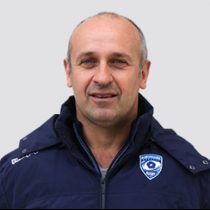 Nicknamed Le Goret ("the piglet") for his shuffling style of running, Philippe Saint-André carved out a fantastic playing career scoring 32 tries in 69 appearances with France with just one of those caps coming of the bench.

Saint-Andre made his international debut against Romania in May 1990 and also skippered his country in almost half of his appearances, taking the arm-band on 34 occasions. A year after his test debut, he competed at the 1991 World Cup whilst playing for Montferrand, now Clermont Auvergne, as France exited the tournament at the hands of England in the quarter-finals.

Saint-Andre was a fiercely committed servant of Montferrand, losing the 1994 French Championship final against Toulouse. Despite his disappoint with Clermont, Saint-André had extreme success with France in New Zealand as he captained the side to a 2-0 series victory over the All Blacks beating New Zealand at Eden Park. He also started the try in the second test which was dubbed the "try from the end of the world" which led to France's 20-23 victory.

He made his second World Cup in 1995, this time captaining the side to third place after losing out to hosts and eventual winners South Africa in the semi-finals. Saint-Andre then left Montferrand for Gloucester in 1996, after eight years with the French club, and following two years playing with the club signed on as coach. During his three-year reign, he attracted controversy for, among other things, recruiting a large number of French-based players and coaches

However, he turned Gloucester into one of the best clubs in England. In just his second year in charge, he led Gloucester to third in the table, with 43 points. However, in the 2000–01 season, Gloucester dropped back down the table, finishing in seventh on the table. However, Gloucester did top their pool in the Heineken Cup, where they made it to the semi-final, losing 19–15 to Leicester Tigers, haven beaten Cardiff in the Quarter-final 21–15. In his final season in charge, Gloucester returned to the top four of the table, though, Philippe Saint-André parted ways with the team in February 2002 ahead of schedule.

He returned to France to join Bourgoin, where he had some success before he was sacked in January 2004 after he revealed that he was in the running for the Wales job after Steve Hansen's departure, a role Warren Gatland ended up getting.

Two months later, Saint-André again went across the Channel to sign a three-year contract with the Sale Sharks. He had success with Sale Sharks as the side enjoyed one of the most successful periods of their history before he Saint-André was given the opportunity to coach France after the 2007 Rugby World Cup, but turned it down when the French Rugby Federation rejected his request to have Brive coach Laurent Seigne join his staff.

He would leave Sale to join Toulon announced as sporting president. Toulon finished second on the table after his first regular season, however, they lost to Clermont 29–35 after extra time in the semi-final. They also came narrowly close in the Challenge Cup falling 28-21 to Carddif. In his second and final season in charge, Toulon found themselves back down the table in 8th. Toulon made it to the semi-final of the Heineken Cup that season, but lost to Perpignan 29–25.

In August 2011 it was announced that Saint-André would replace Lièvremont as head coach of France after the 2011 Rugby World Cup. Saint-André came into the job after the turbulent tournament that saw France reach the final despite disharmony that marred relations between Marc Lièvremont and the players.

Saint-Andre's career as French Head Coach would come to an end after France were smashed by eventual winners New Zealand 62-13 in the quarter-finals with a 44% winning ratio. During the campaign, it was reported that the players launched a "mutiny" against Philippe Saint-André following France's 24–9 loss to Ireland. It was reported that the players coached themselves in the lead up to their quarter-final clash.

Following the departure of Vern Cotter at Montpellier in March 2020, the former winger took over as the director of rugby having also worked as Cameroon's head coach.