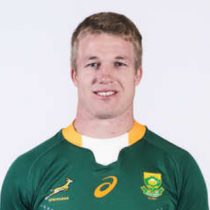 The powerful young lock has shone at age-group level over the last few years for the Sharks, and announced himself on the world stage playing at blindside flank for the victorious Baby Bok team that claimed the IRB Junior World Championship in 2012.

He has a dangerous blend of power and speed which makes him tough to bring down. Making his Springbok debut soon after, he suffered terribly with injuries.

Coming back to fitness towards the end of the 2015 Super Rugby season he slipped straight back into the Springbok Squad and was selected for the 2015 RWC.

Soon after his selection into the Springbok squad for the June 2016 Test series, du Toit was hit with a hamstring injury and was withdrawn from the squad, with Franco Mostert coming in as his replacement.

Du Toit was a standout for the Springboks in 2019 helping the side to a Rugby Championship title and to a Rugby World Cup victory in Japan.

He was named as the World Player of the Year before signing a new contract with the Stormers for 2020. On February 28, 2020 against the Blues in Super Rugby Du Toit suffered a serious leg injury that developed into acute compartment syndrome that almost resulted in an amputation.

By the end of 2020, barring six games in Super Rugby earlier in the year, du Toit missed four years out of eight because of a brutal catalogue of injuries between his breakthrough senior year in 2012 to 2019.

Du Toit has had left and right ankle surgery, two knee operations, a cracked sternum and an acute compartment syndrome, which nearly cost him his left leg earlier, twice. At the time, he was only the 43rd person in recorded medical history to have suffered this condition.

He returned to action in fine form in 2021 with the Stormers and Western Province earning him a recall to the Springbok squad to take on Georgia and the British and Irish Lions. He heads into the internationals with 55 test caps under his belt.

Du Toit featured against Georgia and started the opening two tests against the British and Irish Lions but suffered an injury in the second test which ruled him out for the third test as well as the Rugby Championship.