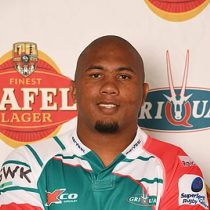 Blessed with pace and fine finishing skills, Arendse made his competitive debut for Western Province in the 2012 Vodacom Cup and went on to make his Currie Cup debut in the same season. Continuing to represent the WP Vodacom Cup team in 2013, Arendse decided to sign with Griquas for the 2014 season.

Arendse has since cemented his spot in the Griquas side making over 40 appearances for the Province.