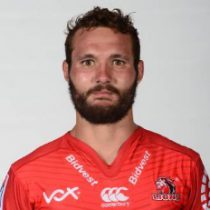 After school, he signed with the Lions and was named in their 2017 Currie Cup squad.

He made his Currie Cup debut for the Golden Lions in August 2019, starting their Round Five match of the 2019 season against the Blue Bulls.

In September 2021, he was named in the Lions' United Rugby Championship squad.