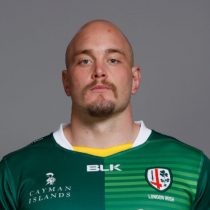 Australian prop Ollie Hoskins joined London Irish from Western Force in the build up to the 2016/17 season. Hoskins has represented Australia at Under-20 level and made 26 Super Rugby appearances for the Force.

Hoskins played 24 times for Irish during the 2016/17 season including an outing in the Championship Final.

Making the move to Irish from Western Force ahead of the 2016/17 season, the English qualified front row made 32 appearances for the Exiles before signing a new deal with the club in November 2017.

Following 123 appearances for Irish, Hoskins was drafted into the Wallabies squad for their Spring tour.

Australia u20, Rugby WA Most Outstdanding U20 Player