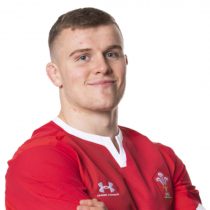 Born in Pontypridd, Wales Shane Lewis Hughes is an imposing lock who stand just short of 2 metres tall and weighs over 100kgs.

Representing Cardiff Blues youth sides Shane was able to make the Wales under 20 side during the 2015/16 and was re selected ahead of the 2017 U/20 Six Nations.

He made his debut for the Cardiff Blues regional team in 2017.

In November 2019, he was named in Wales senior 35-man squad as one of 5 uncapped players that would face the Barbarians.